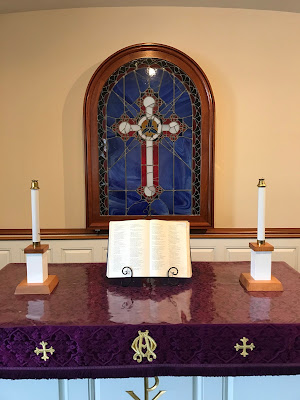 [Our focus for this past Sunday was the Celtic Cross which is part of our "Crosses of Jesus" sermon series during the season of Lent. The Celtic Cross is known for having a circle around the middle of it. The circle represents God's never ending love. We are blessed to have a prominent Celtic Cross in our beautiful chapel.]

O God, Father, Son, and Holy Spirit, thank you for your never ending love. Thank you that your love never runs out and that there is plenty for everyone including for those who feel they deserve it the least.

Help us to be your God intoxicated people who live with an intense sense of your presence. Help us to see every moment as a place of resurrection and new life and may we always devote ourselves to pray, preach, care, and worship.

As we journey to the cross during this Season of Lent may we take this time to empty ourselves of our pride, our shallowness of faith, our prejudices, our quickness to pass judgment, our apathy, and our reluctance to offer forgiveness. O God, when we arrive at the empty tomb on Easter Sunday, may we be the people you have created us to be.

O God, thank you for our Celtic brothers and sisters who teach us to be keenly aware of your presence in every person and place we encounter. And so, we pray for our schools, our hospitals, our colleges and universities, our court houses, our police stations, our fraternities and sororities, our stores, our parks, our prisons and jails, our shops, our restaurants, our fields, our rivers, our Capitol, our homes. O God, we claim all of these places to be used for your glory in bringing about justice and peace for all.

Whenever we look at your cross, help us to see a circle around it so that we may always be reminded that your love is eternal and unbroken. Thank you for being the father who throws caution to the wind by running out to greet and welcome home your wayward children.

And now, as your prodigal sons and daughters, we delight in your forgiving love even as we pray the words that Jesus taught his disciples and now teaches to us to pray together saying,

“Our Father, who art in heaven…”
Posted by Robert McDowell at 5:58 AM No comments: 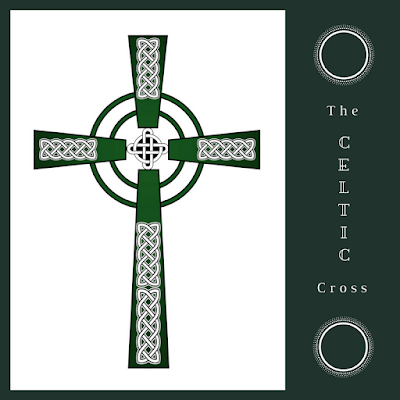 
For this all to be said about us, we need a circle in the middle of our cross.

Celtic Christianity is known for the phrase, "Thin Place Moments," which describes those holy moments in our everyday lives when heaven and earth overlap and we experience God's presence in a very real way.

Share a recent "Thin Place Moment" that has happened to you recently.

Celtic Christianity is known for love of God's creation (nature), poetry, orthodox beliefs with an emphasis on the doctrine of the Trinity, worship liturgy and prayers, emphasis on women in leadership roles in the church, the important of having a spiritual guide, storytelling ability, and hospitality.

Share which of these Celtic Christian aspects stand out for you. Why are they important?

The circle in the Celtic cross reminds us of God's endless love through for the world through Jesus Christ. The story of the Prodigal Son emphasizes this endless love when the father runs out to meet his son who was returning home from squandering the family inheritance.

How have you experienced God's endless and unconditional love in your life?

Celtic Christianity is known for their beautiful prayers. Pastor Robert shared this prayer during the sermon this past Sunday. Say this prayer together as a small group:

Posted by Robert McDowell at 1:00 PM No comments:

Dave's Deep Thoughts - The Best Season of All 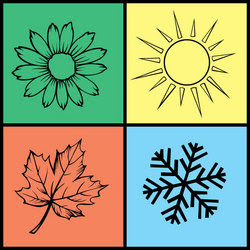 Ok, go ahead and rain on my parade……
but don’t you dare snow on my ski trip!

I know I am going to sound like an old codger BUT here it goes………
When I was young,

We regularly could expect snow in December,
and white Christmases weren’t unusual.

Big snowstorms would routinely hit throughout January and February,
and we would build tunnels through the mammoth mountains of snow.

We actually had ice skates because we actually had ponds that froze over.
Hockey games lasted until dark and our parents didn’t worry where we were.

We shoveled snow for hours because who had a snow blower?
And snow laid on the ground for weeks and months, not days.

A five inch snowfall was routine,
certainly not worthy enough to occupy 50% of the evening newscast.

Three inches of lunchtime snow wouldn’t even raise the thought of early school dismissal,
and we never went on a panic run to the grocery store
because somehow, we thought to buy bread, milk, eggs, and toilet paper on a regular basis.

My snow blower has been rusting out, not wearing out,
and my new ski boots are still new now into March.

I have been warned that an ice shelf the size of Rhode Island
is breaking off from Antarctica and that
buying oceanfront property in Florida
in the near future, might not be the greatest idea.

I canceled a local trip with some buddies
because it was 75 degrees  on February 24th.

And so we reached the 1st day of spring.
What happened?

We received the 1st significant snowfall of the season.

People, stood in lines at Rita’s to receive their free Italian Ice,
shivering in their boots because it was so raw.

My buddies flight out west to ski REAL mountains
was delayed two days……because of snow.

Not anymore.
It’s possible I might be wearing shorts at Thanksgiving.
Memorial Day might be too chilly to swim.
Snow on Easter morning?
I’ve seen it.

The seasons aren’t what they used to be.
That is, except for the spiritual season that Jesus says we are in,
which is, the last days.

Some people think the last days are the days just before Jesus’s return.
And while those will be last days,
we have been living in the last days since the death and resurrection of Jesus.

Revelation Chapter 12 speaks of Christ defeating Satan,
and throwing him and his demons out of heaven and onto earth.

And although Christ has triumphed,
the season of last days will be difficult.
Here is a taste of what happens  as Satan has one last season of roaming the earth:

Nations rising against nations    (Matthew 24:7)
Earthquakes of great proportion   (Luke  21:11)
Pestilences that will plague mankind  (Luke 21:11)
A marked change in human society  (II Timothy 3:1-5) most notably…..
lovers of themselves
lovers of money
disobedient to parents
disloyal
having no natural affection
without self-control
fierce
lovers of pleasures rather than lovers of God
having an appearance of godliness but proving false to its power

Look familiar?
One viewing of the evening news on any given day pretty much confirms
Jesus’s description of this season known as the last days.

Some seasons are more dependable than others.
But this season, though difficult, is not without the good news.

Jesus has promised never to leave or forsake us. (Hebrews 13:5b)
If you are feeling discouraged, or anxious,
or even defeated by these last days,
God has the good Word which is the final Word,

“Behold, I am making ALL THINGS new.”   (Revelations 21:5)
It didn’t take long for this promise to start taking affect after the tomb was sealed.

Mary and Mary experienced it.
Peter and the disciples attested to it
Paul was converted into it.
The earth was reclaimed by it.
And unless you aren’t a part of ALL THINGS,
you are given the good Word in this season.

And that season is assured,
unlike the physical seasons we are experiencing now.

So if it won’t snow in the winter,
I’ll just go to the beach in the summer,
where I will be high tided by the incoming ice shelf.

Yup, these are good days indeed.

And He who sits on the throne said,
“Behold I am making all things new.” And He said,
“Write, for these words are faithful and true.”
Revelations 21:5
Posted by Robert McDowell at 10:35 AM No comments: