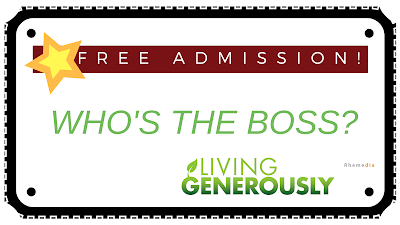 Last week in the first video we met the Donovan family; Frank and his wife Cassie, and their children, Megan and Evan.

From all appearances, Frank and his family enjoy a comfortable life style.  At a recent dinner party, Frank was shocked by his young son's generosity.  Evan, on his own, gave away his favorite toy airplane to another child. It was a spontaneous gift from the heart! Seeing his son's action has caused Frank to re-examine his own attitudes toward giving.

Today, the story continues. Frank has a dream where he is the defendant in a courtroom.  Let's find out what the charges are against him. (8 minute video)

[Due to copyright issues, we are not permitted to post the video.]

Dreams can certainly wake us up! Frank is struggling with what has meaning for him.  In the courtroom dream we heard from three witnesses: his Money portrayed as very well groomed, his Giving portrayed as short of stature, and his Spending, portrayed as well fed.

Considering his life, what can we say about Frank?

Frank has worked hard and accumulated wealth; he has provided well for his family, plus looking out for their future.

Through the companies he owns, Frank also provides jobs and income for other families, however Frank didn't believe he could ever have enough money – he had previously shared with his adviser that he wanted him to double his future worth.

Frank gave to a church and to charities, but these were just line items to him. His heart just wasn’t into it.

One of the main charges against him was that he didn’t include God in his financial decisions.  Frank calls the shots on his own. He didn't understand that God is the greatest giver . Every part of our lives should reflect our faith. Our calendars and our checkbooks reveal what is important to us.

Frank was pulled by the power of his possessions and position so that he forgot what sustains his soul.  Is he guilty of not loving God in all his actions?

There is some of Frank in each of us. As his lawyer aptly put it, we love the bread more than we love the baker.

On this World Communion Sunday, I am thinking of our brothers and sisters in Christ around the world.

Several years ago a friend of mine went to a mountain village outside Monterrey, Mexico on a mission trip. This village had very little resources. They worked with a small Methodist church helping them to build a cistern so they would have water.

At the end of the week, the people of the church wanted to thank my friend and her team and so they prepared a dessert. No one had all the ingredients needed- so between the families, they brought the needed eggs, milk, the sugar to make a custard. No one had enough dishes to serve them - together they brought a spoon, a saucer, whatever they had, a few items from each family. It took the whole church to make that one dessert.

They were so pleased when they gathered around a table and they offered them the pans of custard. Remarkably, they didn’t expect any for themselves.

My friend shares that she doesn’t think that she will ever match their generosity or their hospitality in her own actions but it remains a model in her heart to this day. It is not about how much you have, but how you respond in love with what you do have.
We are managers of God's gifts, and we make the decisions about what happens to our blessings: how they are spent, saved, or shared.

We make choices and set our priorities. In this sense, we are the boss, and hopefully our decisions will bring abundant life to ourselves and to others. When we strive to love God with all that we are and our neighbor as ourselves, our choices will reflect God's generosity.

Next week we’ll see how Frank continues to grow in his outlook toward giving.

May our hearts be so full of God's love so that when we share our abundance with others, we will give the best of what we have and who we are.

We are in the 2nd week of a 5-week focus on the topic of what it means to live generously. Each Sunday during worship, we are watching a video segment on the life of the Donovan family which includes Frank, his wife, Cassie, & their children, Evan and Megan. They they are discovering what it means to live more generously. During the opening Sunday, we saw how Frank, the father, was reluctant to help out a missionary family in need. On the other hand, Frank's son, Evan, was willing to offer his favorite toy. Evan showed us that giving is a matter of the heart.

Share a time when you noticed somebody giving generously from their heart to help someone in need and what did you learn from that experience?

For this 2nd week, the video shows Frank having a dream. He's a defendant in a courtroom and three witnesses personified as Money, Giving, & Spending come forward to testify against him. Frank is charged with not being generous from his heart. There is a little Frank in all of us.

How do you know if you are living generously and giving from your heart vs. simply giving out of a sense of duty and compulsion?

Pastor Robert shared a story in his sermon about a friend of his who experienced generosity while on a mission trip to Mexico. Her team spent a week helping to build a cistern that would provide water for the people of a little village. The people of the village surprised the mission team by pooling their meager resources together to make special desserts for them, but they didn't have enough to make any for themselves. This left such a positive impression on the mission team because they learned that generosity isn't about how much you have but what you do with what you have been given from God. Generosity is about sacrificial giving.

Why do you think stories like this have a way of inspiring us to become more generous in how we manage our money, time, and service?

Posted by Robert McDowell at 12:00 PM